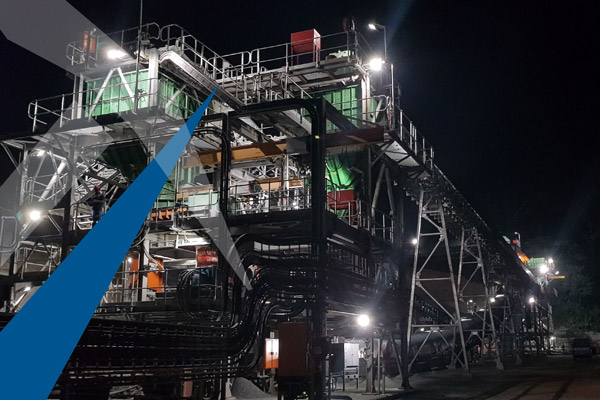 Alphamin’s Mpama North mine is the world’s highest grade tin mine, currently producing mined material (run of mine) at an average grade of around 4.5% tin.

The equivalent in value of a 12% copper and 14.6 g/t gold resource. It is also around 4 times richer than any other operating tin mine.

The company has enormous potential, consisting of five exploration licenses and one current mining license covering 1,270km2 in the North Kivu province of the Democratic Republic of Congo.

Mpama North is already in production, and by using the positive cashflow it generates additional production from Mpama South and other prospective targets is planned.

Alphamin’s processing plant’s construction was completed in the second quarter of 2019.

The processing plant was carefully designed to be as simple as possible. This was achieved using primarily gravity separation, with a small float at the end to eliminate impurities in the final concentrate. This simplicity allows us to keep our costs and power consumption modest, while obtaining good recoveries of around 72%.

At present our all-in sustaining costs (AISC) are between $10,000 and $12,000 per tonne, within the lowest quartile of the global cost curve. These are planned to be lowered further as the tin concentrate production process is further refined and more volume is added.

* ITRI Cash Costs include the cost of mining, processing, smelting, marketing, transport and any royalties or taxes. Costs are reported net of by-the product revenue (NBP).

* ITRI Full Costs include the cost of mining, processing, smelting, marketing, transport and any royalties, taxes, cost of administration, exploration and development, mine closure allowance and amortisation of capital expenditure. Costs are reported net of by-the product revenue (NBP).

Alphamin has an off-take agreement with US-based Gerald Metals for the next five years of production.

This guarantees a receptive customer for all production at market-referenced prices.

Alphamin’s vision is to realise the full value potential of the world’s richest known tin resource complex. The immediate goal is to embed and improve efficiency of the Mpama North mine. Over the next few years the aim is to expand tin output from the current established footprint incorporating additional production from other locations on the licensed area.

Mpama South deposit is less than one kilometre from the current ore processing facility and has the potential to add to current production and significantly extend the life-of-mine operations of the current facility. In addition to Mpama South, several other prospective tin targets have been identified near Mpama North.

All available evidence suggests Alphamin is a rare opportunity for investors.

The challenge for start-ups in any industry is whether to focus on profits or growth. Alphamin is in the enviable position of being able to deliver both.

Alphamin is already making good profits, with an established footprint, significant production from the Mpama North mine, additional capacity in the current processing plant and the potential to add production from nearby tin deposits, Alphamin is likely to follow a path of increased output at lower incremental unit costs for many years to come. This has a high probability to hike potential equity returns.